James E. "Red" Trevett (85), passed away on March 16, 2018 in Grants Pass, Oregon. He was born on September 11, 1932 in Plymouth, Iowa, and was the fourth of seven children born to the late Clara Mae Park Trevett and Jasper Lee Trevett. James moved with his family to Bellflower, California in 1949, living in Southern California until moving to Grants Pass in 1970. James served in the Army during the Korean War, and was a cabinet maker by trade. He was the loving husband of Janice Trevett for 47 years. In addition to his wife, James is survived by his sons, Robert "Bob" Trevett (Marissa), David Trevett (Kiersten), Dennis Phillips (Tina), Charles Phillips, and daughter, Donna Phillips Duval; sister, Marlene Wilder; grandchildren, Kristy Kolodge, Lindsey Hudson, Joshua Duval, Bryce Trevett, Kylee Duval, Courtney Trevett, Matt Trevett, and Kiara Trevett; great-grandchildren, Braden O'Brien, Kenley O'Brien, Merritt Kolodge, Wesley Kolodge, and ZoÃ« Duval. He was preceded in death by his brothers, Kenwood, Jack, Keith, and Donald, and his sister, Jackie Hyder. He also leaves behind zillions of nieces and nephews, as well as his adored dog, Mandy. James loved fishing, gardening, NASCAR, going to Seven Feathers, and most of all, spending time with his family and friends. Those who wish may donate in James' name to Multiple Myeloma Research Foundation. There will be a private family celebration.

To plant memorial trees or send flowers to the family in memory of James Trevett, please visit our flower store.

A candle was lit in memory of James Trevett 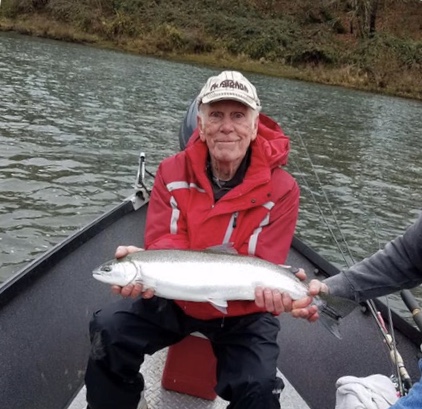